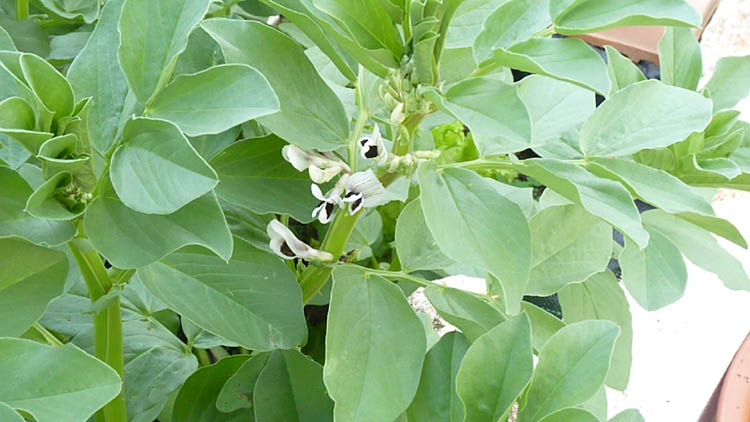 I don’t know whether the excitement of our imminent trip to the UK for several weeks was sapping my enthusiasm, or just the December blues due to the long dark evenings, but I really had to dig deep (pardon the pun) to motivate myself to work in the garden. I’m not usually given to bouts of lethargy so perhaps the virus I picked up in France still made me feel sluggish. However, we can only reap what we sow and I kept plodding along.

The Favas seeds planted on the 24th October have grown well and the plants are now in flower. Hopefully we will be eating the beans by the end of February

The Broccoli and Cauliflower plugs planted the end of September are growing are also growing well and have already yielded enough for several meals. I’ve finally worked out if I only buy three plugs of each at a time this is more than enough. This, in theory, gives me four plants for me and two for the slugs!

The four tiny red cabbage plugs I planted at the end of November are growing really quickly. Last year I planted far too many red cabbages and several were wasted as even my friends were red-cabbaged out! Perhaps four is still pushing it, but the snails are bound to enjoy at least one.

This year I planted 20 baby red onions, as an experiment, because they are expensive to buy in the shops. The guy at the market tried desperately to persuade  me to buy a 100! I mean, what would I do with 100 onions? He even offered me a discount of 50 cents as an incentive.

Growing Fruit and Vegetables in Containers

I’ve discovered one of the keys to successful strawberry growing in containers is to regularly remove the dead leaves so they do not rot into the soil.  Strawberries are the one thing that seem to grow well providing I can keep the mealybugs at bay. Removing the dead leaves and letting the air circulate seems to help. They are still selling bunches of strawberry plants so I’m going to buy some more.

I planted two pots of sweet potatoes (batata doce) on the 18th September, but I have the horrible feeling they are not growing.

The potatoes I’m growing in bags all got potato blight. The potatoes although small were fine, but unfortunately all the pots of potatoes had to be destroyed. I will not attempt to grow potatoes again as I had exactly the same problem last year when the blight spread to my tomatoes.

Mr Piglet kindly built me a frame for my blackberry and tayberry plants. It’s nothing fancy as we utilized posts and wire we already had, but it will do the job. Because of the proximity of the hedge and its aggressive root system I’m growing most of my fruit bushes in large containers.

Peach trees in pots
The two peach trees growing in pots are still alive, even though they look dead.
Lime tree
Citrus leaf weevil is still attacking the leaves despite various applications of olive oil and soap solution.
Groselhos
I’m not entirely sure exactly what this fruit bush is, but my guess is that it is a cross between a gooseberry and a redcurrant.
Blueberry
The blueberry cuttings I made in France are still holding onto life by their fingernails…
Rhubarb in pots
My Rhubarb plant – well there is nothing much to say except it looks dead. It’s put up a valiant fight for survival over the years, but I think I must concede defeat. We will see.

raspberry canes
I bought three sticks from the market in Sao Teotonio and planted these directly in the ground. At just one euro each it was worth taking a chance.