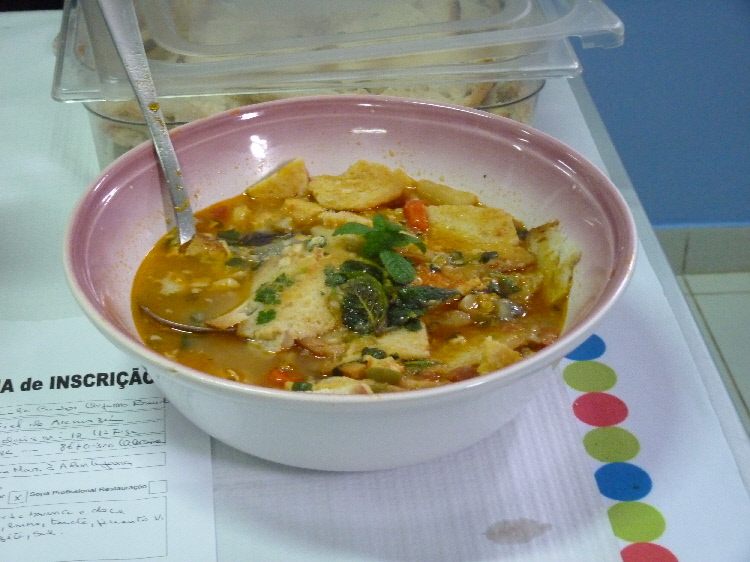 We’ve attended many fairs and festivals in Portugal, however this has to rank as not only the most interesting but the most humbling lesson in social integration and how welcoming a small community can be.

The day of the “Feira da Sopa” (Soup Fair) dawned cold, damp and miserable. In fact, it was the sort of bleak February day where you could quite happily stayed at home curled up in front of a roaring log fire with a good book and not travelled miles to visit a soup fair.

When we arrived black clouds loomed ominously so you can imagine our relief when we discovered the event was held in what can best be described as the village community centre. Not knowing what to expect we tentatively entered the hall where a throng of people had already gathered and were all talking at once. If you are unfamiliar with the area, Rogil is a typical farming community in the Western Algarve. Families have lived there for generations, and as such, are a very close-knit community. The atmosphere, although welcoming, reminded me of a large family wedding, and us neither guests of the bride or groom.

Tables and chairs were neatly arranged round the edge of the room with a large space set aside for dancing. We made ourselves comfortable and “people watched” as we waited patiently along with all the other spectators. The organizers arrived, set up displays, tested the microphone and generally stood around clutching clipboards and looking important (busy).

According to the poster advertising the event it started at 15.30 hrs, but of course it didn’t. The trouble is, being typically English we have this fixation about punctuality and we can’t seem to grasp the simple principle that NOTHING in Portugal EVER starts on time. Honestly, you could train your pet dog quicker!

Fortunately, the bar did open on time so armed with large plastic cups full of rustic red wine (aka courage) we mingled with the locals trying to discover exactly what was happening, or going to happen. Now in a country where you speak the lingo this is easy, but not when you don’t. I soon realised, as my friends looked at me expectantly, that the boundaries of my pidgin Portuguese just did not extend to the finer points of a “Feira da Sopa”, especially without any previous frame of reference to draw on. The only facts I knew for certain were: there was soup (maybe free), music and dancing. However, it soon became clear as we “mingled” that we were strangers and the only non-Portuguese speaking people in the room.

People arrived, carefully carrying large soup pots of various shapes and sizes, and directed to a long table. We watched proceedings with curiosity as each pot had its own dedicated space and a sign describing the soup along with a list of its ingredients. I take numerous photographs, and thanks to my exceptional powers of deduction, I concludethere are two types of soup – Sopa da Terra and Sopa do Mar – I translate these to mean “ Soup of the Land and Soup of the Sea. So far so good, but what did we do? We are still puzzled.

We then discovered a stall selling terracotta commemorative soup dishes so keen to support the event we bought one each. Besides, how else would we eat the soup?

While mingling and taking photographs my friend fortunately met someone who spoke English and the missing pieces of the puzzle finally came together. This was Rogil’s first “Feira da Sopa” which is actually a soup competition. Suddenly as the mist of confusion lifted we looked at each other in one of those special “ah hah” moments! Apparently, each competitor cooks a soup which is assessed by the panel of judges. Once the judging process is complete, the public, that’s us, can try all the different soups free. Now I know why there were so many people standing around with clipboards – they are the judges waiting for all the competitors to arrive with their soup.

As the judges tasted the various soups, pulled faces and made notes the competitors looked nervous, and I felt nervous for them.

A crackling noise from the microphone, followed by a high pitch whistle of feedback demanded our attention; one of the organisers was on stage and about to make an announcement. As he spoke with joviality his words accentuated by vigorous shoulder shrugging and expressive hand waving, I tried desperately to translate. Our friends looked at me expectantly; almost willing me to understand as if by praying for divine intervention, I would miraculously understand. However, there was no divine intervention, and no miracle. My limited grasp of the Portuguese language left me feeling frustrated and inadequate. Why, despite extensive study, do I seem to have such a mental block with languages?

We looked to the other spectators for inspiration. The judging complete, competitors served their soup to eager spectators and like lemmings we willingly joined the nearest queue. We tasted all the soups including fish, cabbage and a delicious pumpkin and curry soup which we later discovered won first place in the “Sopa da Terra” category. Emboldened by several glasses of “courage”, aka red wine, and several bowls of hearty Portuguese soup I quickly overcame my initial shyness as I attempted to make polite conversation in Portuguese, while I stood in the queue.

As the queues dwindled and dancing commenced I noticed all the women sat in groups, while most of the men loitered by the exit from the hall and entrance to the bar. So the women danced together while the men watched. Fascinated, I listened to the accordion player, picked up the beat of the music and studied the feet of the dancers. The dance did not look that difficult I thought, so in a moment’s insanity I pulled my friend on to the dance floor and we shuffled round with four left feet between us. The dance, almost like a galloping two-step with extra steps thrown in here and there for good measure, is harder than it looked. Hoping for inspiration we shadowed other dancers who encouraged and approved of our efforts with a smile and a nod. I don’t know whether my fitness was an issue or the elderly Portuguese women superhuman, but as the last bars of music played I gasped for breath and mopped my sweating brow with a tissue.

Suddenly the music stopped, there was a hushed silence and the microphone crackled to life once again. We turned to see what was happening; all the judges were on stage and a hushed silence enveloped the spectators and competitors. Various announcements ensued then enthusiastically received with applause as some competitors were summoned to the stage and presented with a plaque. Ah ha, they are announcing the winners!

We thoroughly enjoyed the Feira da Sopa and look forward to discovering more Feiras across the Algarve and Alentajo in the future. However, next time I will take my dictionary and swot up on some relevant vocabulary beforehand.

Is Language a Barrier to Social Integration in Portugal?