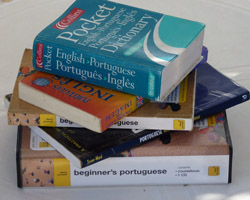 Moving to a country where English is not the first language definitely has its disadvantages if you are not a natural linguist. Some people are fortunate to learn a language purely by osmosis, but not me – I have the retentive memory of a gnat. In the past I’ve spent a small fortune on Portuguese lessons, and hundreds, if not thousands of hours studying, to no avail. So despite learning there are four different ways to say “my”,  two, no three ways to say “you”, popular verbs in the present tense and basic vocabulary which I must also remember if the words are masculine or feminine,  it’s surprising I’m still struggling to string a sentence together! AND, to further test my memory Portuguese sentences are grammatically constructed in a different order to English. For example “The black cat” is “O gato preto”.  Are you still with me?

Fortunately, the Portuguese, unlike the French, are very tolerant if you mispronounce a word or grammatically abuse their language.  They usually laugh with you and not at you, so in this respect I’ve learned not to take myself too seriously if I make a mistake. I am gradually getting to grips with the pronunciation and generally find if I’m unsure how to pronounce a word miming usually helps. A classic example, and the memory of which still makes me smile, is the time I wanted some eggs (ovos) and the shop assistant brought me grapes (uvas). In desperation I made chicken clucking noises as I pretended to lay an egg to get my point across. She looked at me in surprise and then laughed until the tears rolled down her cheeks. Applauding my chicken impersonation skills she then made me pronounce both uvas and ovos over and over until I had perfected the sounds and remembered the difference.

However, I believe you can only live in a country for so long without speaking the language before an element of frustration sets in. For example, simple things like reading the labels on products (particularly medicines) and supermarket magazines announcing special offers; participating (and eavesdropping) in conversations all become a challenge instead of something you take for granted as part of everyday life. You want to become involved in the local community and cultural events, but no matter how hard you try without speaking the language you will only ever be an outsider. It’s almost as if although you are surrounded by people you feel totally alone. There’s no visible barrier, you are there in body, but as for integrating in the indigenous community you might as well be an alien newly arrived from the planet Zog. Yes, I have many English-speaking expat friends, but it’s not the same.

For readers who have never left their homeland to live in a country where English is not the first language I ask you to close your eyes for a moment and imagine you are surrounded by people, yet you feel totally isolated. Almost as if you exist in a parallel world where you want to reach out but the language barrier feels like a glass wall, and you are left on the outside looking in. Everyone is talking at you – you listen attentively hoping you will at least be able to understand something, but one word in ten is like saying two plus two equals five.  Unable to understand and like a little rabbit trapped in the headlights of an on coming car,  you freeze, paralyzed by your own ineptitude, then smile lost in your own insular bubble.

The simplest things on a bad day can drive you absolutely crazy with frustration, yet on a good day, when the fog of confusion clears, you feel incentivized to study once more.

Although my resolve to learn Portuguese has returned with renewed vigor my efforts are thwarted due to financial restrictions. The price of  lessons are now far too expensive  and the local Camara (council) no longer organise free lessons for foreigners.

I’ve tried making polite conversation in Portuguese with some women at our local café, however once we’ve exchanged pleasantries over health and weather I’m left standing there grinning like the village idiot while I trawl the recesses of my memory to retrieve words and phrases in a desperate attempt to keep the conversation going.  Even when they try (no doubt out of sympathy) I look at them blankly as I’m unable to understand their questions, and they eventually give up. I would love to have a more in-depth conversations about recipes and food, gardening, the local area, traditions and even politics. But of course I can’t!

The last straw and the catalyst which ignited the touch-paper of my frustration finally came when we went to the soup festival in Rogil. (I will write about that in another post).  Sadly, although the locals made us, as outsiders and foreigners, very welcome the language was definitely a barrier to integration.

How did you learn to speak another language?

Do you think it’s possible to truly integrate in a community unless you share a common language? I think not, but I am interested in reading everyone’s comments especially from my Portuguese followers!

96 thoughts on “Is Language a Barrier to Social Integration in Portugal?”