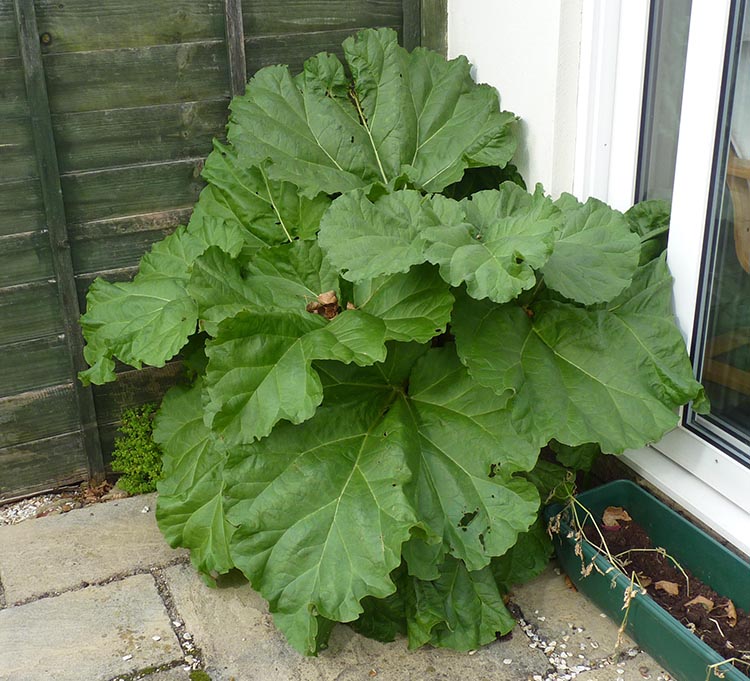 When my son and fiancée moved to their new home in the UK they inherited a neglected, but nevertheless healthy rhubarb plant which had masses of thick juicy stalks. I was green with envy as the plant was growing in a small container and I’d desperately tried for years to grow rhubarb in containers, with little success.

Thinking of my ailing rhubarb plant in Portugal I jealously stared at it in disbelief; it defied EVERYTHING I’d been advised about growing rhubarb in containers – the container was too small, the soil was of poor quality and dry as a bone!

Why did this neglected plant look so healthy and my loved and nurtured plant, so sickly?

Six months later, while celebrating our grandson’s first birthday, I reminded our son he’d promised to cook me a rhubarb crumble.

True to his word he duly picked a bowl full of thick healthy rhubarb stalks and I left him in the kitchen to prepare the desert.

I asked him to take some photos once cooked, so I could share the recipe of his delicious creation on my blog. However, when I later questioned him in detail about the recipe he began to squirm, prevaricate and then admitted he’d cheated by using a prepacked crumble mix.

All the time we were eating he must have dreaded the moment of truth. He’d been telling his Mum *porkies.
*(Porkies is a version of cockney rhyming slang: Pork pies which rhymes with lies).