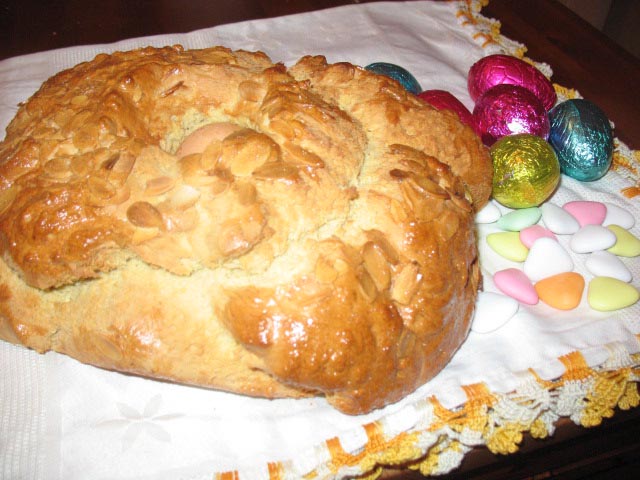 Shopping at the local farmers market a couple of years ago  I could not help but notice a crowd of women gathering round a particular cake stall.

Curiosity eventually getting the better of me I went over to investigate and squeezed my way through to the front of the queue. I discovered the buying frenzy was for an odd-looking “cake” that had a hard-boiled egg (complete with their shell) embedded in the centre. I understood just enough Portuguese to establish it was actually traditional “bread” called Folar and was eaten at Easter. Intrigued, especially as they were literally selling like “hot-cakes”  I decided to bite-the-bullet and bought one to surprise some friends who were coming for lunch Easter Sunday. Sadly they were not that impressed as pieces of eggshell remained embedded in the bread which made for a rather bizarre gastronomic experience to say the least.

Years later I am more keen to discover  as to the “WHY” hardboiled eggs are included and the story behind it…and “HOW” to cook my own Folar.

Folar is traditional Portuguese Easter bread and contains hard-boiled eggs. The eggs apparently stem from the Pagan festival Oestre (egg) where eggs were used to symbolize rebirth. Despite regional variations such as including lemon zest, almonds or cinnamon they all contain hard-boiled eggs held in place by a cross of bread dough.

Recipe courtesy of Paws2Claws from Central Portugal. This is the recipe her Portuguese neighbour uses and kindly passed on.

Ingredients
400g Flour
15g Fresh Yeast or packet yeast – (fresh yeast is best and you can buy it from any Paderia (bakery))
45g Caster Sugar or Icing Sugar if you can’t get Caster Sugar
90g Butter
1 Egg
300ml Milk
1 tspn Aniseed
1 tspn Cinnamon
pinch of sea Salt
To decorate:
1 or 2 hard-boiled eggs (leave in their shells)
1 beaten egg for brushing
(Sliced almonds for decoration is not traditional)

Method
In a bowl combine the yeast, 1/4 of the flour, a 1/3 of the milk (warmed) and half the sugar.
Mix together to form a dough, cover and leave in a warm place for 1/2 hour
Whisk the eggs with the salt and spices and remaining milk and sugar.
Kneed in the flour and egg mix to the dough gradually then kneed in the butter.
Cover the dough and leave it to rise for about three hours in a warm place.
Break the dough into two (or leave whole) and plant the eggs on top. Make a cross with two rolled lengths of dough to put on the top, holding the egg in place.
Brush the bread with the beaten egg.
Cook at 425F/Gas 7 until golden brown

I had planned to “experiment” with this recipe on Friday, but after 6 hour lunch with a group of friends meant I was not in a fit state to cook anything by the time I returned home! I am yet to attempt the recipe and photograph the result! I am unsure of the original source of the above photo but it at least gives you an idea of what the Folar “should” look like.

What traditional food do you like to have at Easter?