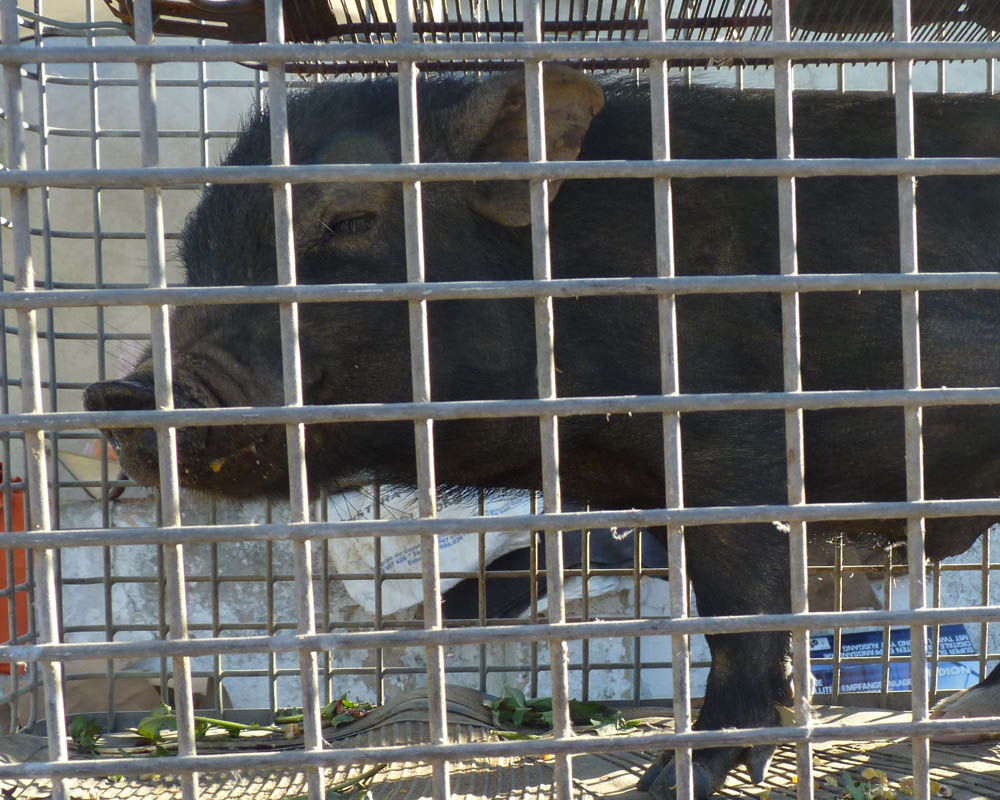 I went to the local flea market on Sunday; I needed to buy some
English books and Broadbean seeds. However, I was immediately
distracted from my “mission” by a couple of piglets which an old Portuguese farmer was trying to sell. They do not normally sell livestock at this market so I was really surprised. Intrigued, I wandered over to investigate.

Some people are suckers for homeless dogs and cats, me it’s pigs – hence my name “Piglet”.

They were so cute! One piglet was a bit on the grumpy side and turned its back on me but the other was absolutely adorable. It was love at first sight! Black in colour with a cute little scrunched up face and sad eyes it stood about 12 inches high. It made me smile because despite shaking from snout to trotter with fear it still rooted around the bottom of the cage looking for food. Have you ever stood in front of a caged animal, looked into its eyes and just for a moment you connect?

At this point I was having a mental argument, my mind in torment. Two voices debating within me – Heart versus Common sense.

Heart “It’s so cute I want to take it home”
Common sense “Where on earth are you going to keep it?”
Heart “In my new raised vegetable garden”
Common sense “What do piglets eat”
Heart “If it’s like me usually anything, hmmm disclaimer on chickens’ feet, snails and unmentionables”
Common sense “Who’d feed it when you’re on holiday?”
Heart “Oh dear, my friends aren’t into farm animals”
Commons sense “How big will it grow?”
Heart (now beginning to see common sense) “Ponderous, because if it’s not a Vietnamese Pot bellied Pig – probably HUGE!”
Common sense…silence, let the implications of last sentence sink in.
Heart “Oh, but it’s so cute I can’t possibly leave it here. It may end up served as a Leitaõ (Suckling Pig) roast dinner”

As more people gathered round and children began to poke it through the bars of the cage the poor little piggy was terrified and began to tremble visibly. I tried to make soothing pig-like noises. It looked at me with pleading little eyes and was probably telling me to stop snuffling as I was the one drawing the crowd, not him.

Negotiations for “Grumpy” piglet were now underway with a stocky, roughly dressed Portuguese man. He was fiercely negotiating a keen price and delivery with the seller. After much arm waving and shoulder shrugging an agreement was finally reached, a deal struck and then sealed with a vigorous handshake. I desperately hoped it was not going to end up as Leitaõ (Suckling Pig) for next Sunday’s lunch.

The fate of this little piggy was in my hands. I had to make a decision!

What would you have done?

38 thoughts on “This Little Piggy went to Market…”