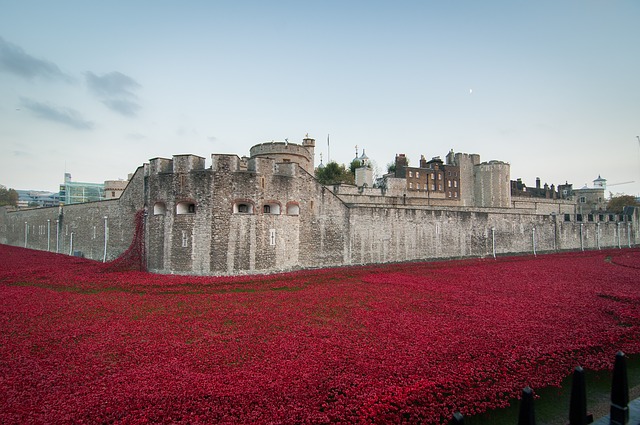 Centenary Commemorations for The First World War started on 28 July 2014 with the outbreak of the war, and continues until 11 November 2018 on Armistice Day.

For the Fallen
by Laurence Binyon

With proud thanksgiving, a mother for her children,
England mourns for her dead across the sea.
Flesh of her flesh they were, spirit of her spirit,
Fallen in the cause of the free.

Solemn the drums thrill; Death august and royal
Sings sorrow up into immortal spheres,
There is music in the midst of desolation
And a glory that shines upon our tears.

They went with songs to the battle, they were young,
Straight of limb, true of eye, steady and aglow.
They were staunch to the end against odds uncounted;
They fell with their faces to the foe.

They shall grow not old, as we that are left grow old:
Age shall not weary them, nor the years contemn.
At the going down of the sun and in the morning
We will remember them.

They mingle not with their laughing comrades again;
They sit no more at familiar tables of home;
They have no lot in our labour of the day-time;
They sleep beyond England’s foam.

But where our desires are and our hopes profound,
Felt as a well-spring that is hidden from sight,
To the innermost heart of their own land they are known
As the stars are known to the Night;

English poet Laurence Binyon, overwhelmed by the carnage and loss of life by British and Allied forces in World War 1, penned one of the most moving tributes the world has known to our war dead.

In Flanders’ fields the poppies blow
Between the crosses, row on row,
That mark our place: and in the sky
The larks, still bravely singing, fly
Scarce heard amid the guns below.

We are the dead. Short days ago
We lived, felt dawn, saw sunset glow,
Loved and were loved, and now we lie
In Flanders’ fields.

Take up our quarrel with the foe;
To you from failing hands we throw
The torch; be yours to hold it high,
If ye break faith with us who die
We shall not sleep, though poppies grow
In Flanders’ Fields.

Where would we be today without these brave soldiers? I often wonder how different life would be if we had not won the first and second world wars.

6 thoughts on “A Carpet of Poppies to Commemorate WWI Centenary”