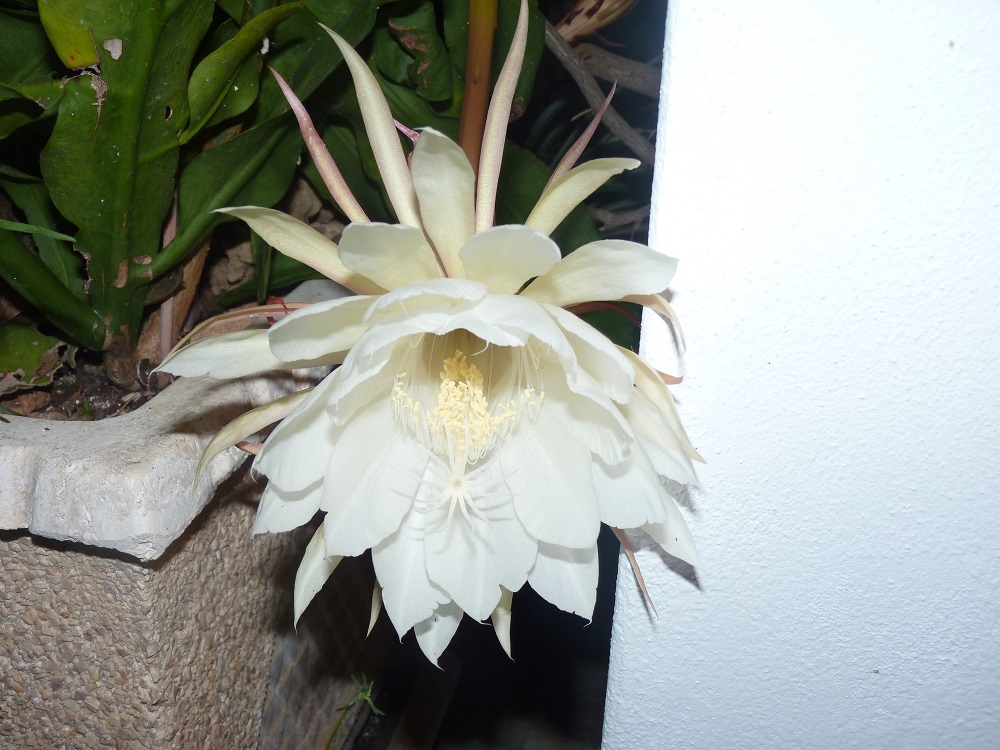 About eighteen months ago I was given a small, insignificant looking cactus. I had no idea of its name until I stumbled across a facebook discussion group for ‘cacti and succulent’ enthusiasts. One of the members had posted a photograph of the plant (no flowers) and was trying to identify. I immediately had an ‘aha’ moment as I recognised the ‘leaves’. I later discovered they were not ‘leaves’ but referred to as ‘stems or branches’.

My baby was identified as an Epiphyllum Oxypetalum (Queen of the Night). WOW! My first thoughts were of an ugly duckling morphing into a beautiful swan.

After further research (thanks Google) I discovered it only flowered for one night when it was adorned by striking white scented flowers. So in order to enjoy this display, it would need to be rehomed near the house and preferably by the lounge window. Maybe it was fortuitous that one of my pot plants by the bougainvillea had recently passed to plant heaven as this proved to be the perfect location: Early morning sun, protection from the sea winds and the bougainvillea provided a ready-made support. If the plant is left in full sun, the stems will yellow. I agree. Within weeks of moving the plant to a more shady location, it changed colour and in just a few months my epiphyllum oxypetalum grew like a runner bean and went from only 12 inches high to around 36 inches.

At the time of posting my queen had flowered in both August and September and there are more buds on the way.

Watering – too much or too little? I’ve noticed that the top inch of soil will dry out quickly while the roots are still moist. I could never decide so I invested in a moisture metre and insert the prongs to test before watering.

Do you fertilize your cacti and succulents? I was informed, no. But common sense prevailed and I decided a pot plant won’t thrive on fresh air. I now feed my cactus and succulents a balanced fertilizer during the growing season.

Night Orchid Cactus
Further information on caring for succulents and cacti.
A beginners guide to succulent and catcus care

10 thoughts on “Queen of the Night Orchid Cactus (Epiphyllum Oxypetalum)”