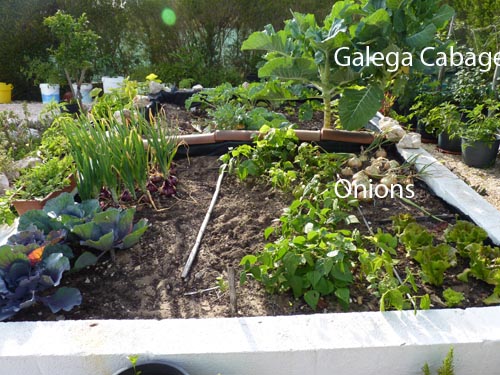 This year I’m keeping a photographic diary of my humble vegetable garden; what’s growing when, where and how well. Yes, I know it’s August and I’m writing about June, but with recent trips to the UK and France I am way, WAY behind on my blogging activities. I took all the photographs, so at least I could backtrack and post at a later date.

Growing Fruit and Vegetables in Containers

My experiment to grow tayberry and blackberry bushes in pots seems (fingers crossed) to be successful. They have produced many flowers which are now forming into fruit. (Toes crossed we get to eat them before the birds or insects)

The rhubarb is doing reasonably well. Not brilliant but it’s still clinging to life. Unfortunately, some white fluffy bugs, which I believe are the dreaded mealy bugs have taken up residence. The only thing I’ve found to kill these annoying little critters is diluted hydrogen peroxide 3% volume. However, I do not want to apply this concoction to something I plan to eat!

The groselhos bush I purchased last year at Lidls continues to thrive but as yet has not yielded any fruit. I think it’s a cross between a gooseberry and a raspberry. We will see.

Can you name these fruit bushes?

The following are stem cuttings I took last year from my daughter’s garden. One is a raspberry the other two are either blackcurrant, or blueberry.

Yay! I finally have two tiny limes. Despite removing all the leaves affected with the citrus vine weevil it has returned. Nothing seems to deter these tenacious little critters!

The cucumber plugs planted in March have a couple of healthy cucumbers ready for harvesting with more on the way.

In February I bought two aubergine (beringela) plugs. One I planted in the raised vegetable bed and the other in the pot pictured below. Only the plant in the pot survived and it is now bearing fruit!

The myestery plants courtesy of God, or the birds proved to be squash plants. There seems to be two varieties – well put it this way, the squash are two different shapes. I’ve never been successful growing squash in previous years so I’m naturally delighted by the gift. This variety must be Piglet proof, so I better remember to save some seed for next year!


What else am I growing?
Galega Cabbage: Thes cabbages are now over 1m (3′) tall. These are brilliant if you are limited for space. You remove the individual leaves as you need them and you are eventually left with what I can only describe as a cabbage tree!
Red cabbages:
Tomatoes: masses of cherry tomatoes. I was given other varieties but they did not survive or grew too leggy to grow in pots.
Yellow and red peppers: Flowers but no fruit
Raspberries: no fruit
3 peach trees: no fruit
Physalis: fruit, but unripe
Orange Tree: this now has two baby oranges which should be ready by Christmas
Fig tree: all the leaves turned yellow and then fell before turning brown. I was told it was either too much water or not enough. Don’t you just love that tidbit of advice?

My cabbages are plagued with cabbage white butterflies and then hundreds of squishy green caterpillars. I spray the cabbages with a weak solution of washing-up liquid and water, although over time I’ve manned up and now squish the caterpillars with my bare fingers.

Ants! We have five different types of ant. We’ve tried most branded treatments but none seem to work. I was once given a recipe for a homemade concoction which included a powder called borax. Unfortunately, after spending ages sourcing the borax I lost the recipe.

25 thoughts on “Piglet’s Plot in June”