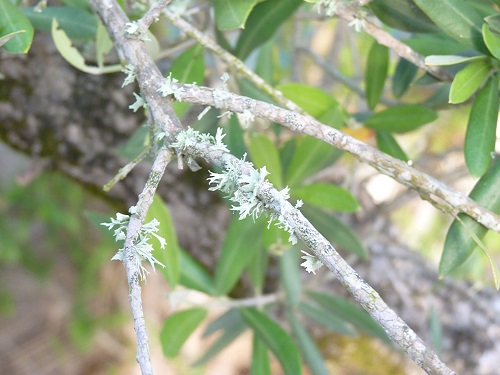 About six months ago I noticed some strange sort of fungi, as I thought at the time, growing on the branches of the Melaleuca hedge, Olive tree and Bottle Brush bush. I took a sample to our local garden-cum-hardware shop where you can by everything from garden hoses, seeds, garden tools etc. to chemicals to treat various pests and diseases. The guy who served me just gave me a ‘Portuguese shrug’ and told me to feed the plants to encourage growth. I was also given the same advice by someone else.


I dutifully fed the plants with slow release blue granular fertilizer and thought nothing more about it until we noticed the Melaleuca was losing all its greenery and was completely bald in several places. Not good for a hedge that was supposed to offer privacy.

Mr. Piglet set to and started scraping off the sprouting fungi while I attempted to consult Mr. Google for an answer.I am no further forward as I write this post except I now know they are called a Parasitic Plant.

What I don’t know as yet if there is a product I can buy which will kill it without killing the host plant. Suggestions welcome!