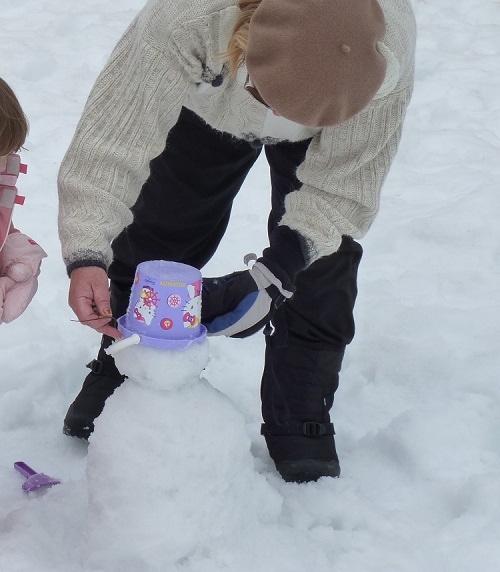 I was sorting through some old photographs on my computer when I was reminded of the day we spent in the Alps with our French family. We don’t get snow in the Algarve, so I was just as excited as my four year old granddaughter by the prospect of building a snowman.

Before we left, I snuck into the garage to find my granddaughter’s beach bucket and spade which I hid in my voluminous handbag. My handbag bears an uncanny resemblance to Mary Poppins’ portmanteau and its contents a constant source of amusement to friends and family.

After a couple of hours wedged in the back of the car with another sizeable adult, a bulky child seat and with my bottom impaled on the armrest for creative seating to save space, we finally arrived at Villard da Lans, a small ski resort near Grenoble.

Some innovative parking by my French son-in-law meant we were not too far from the entrance to the ski-lifts. Fortunately, the lift was a proper lift with windows, a solid floor and a door as opposed to one of those scary lifts you hop on and then launch yourself into the snow with a wing and prayer to get off while it is still moving. I am sure both have a technical name but I was a ski-slope virgin.

After a hearty hot chocolate at a cafe near the slopes we went in search of snow away from the skiers who whizzed past at an alarming speed  with no emergency stop if you got in their way.

I’d never been on the slopes before and I can only liken it to a motorway in rush hour.

We finally found a suitable area away from the mayhem where there was plenty of virgin snow.

It was then, to my daughter’s absolute horror,  I produced the bucket and spade from my handbag and my granddaughter and I set to work.

Yes, I am probably the only person to take a bucket and spade to the ski slopes to build a snowman.

Once we’d built the snowman we scouted around for some hair, facial features, arms and buttons.

We were extremely proud of our snowman.

Perhaps next time we go we will sculpture snow-castles for the ice princess.

There is something magical about snow. A pristine blanket that creates an illusion of perfection.

Anyone else taken a bucket and spade skiing?