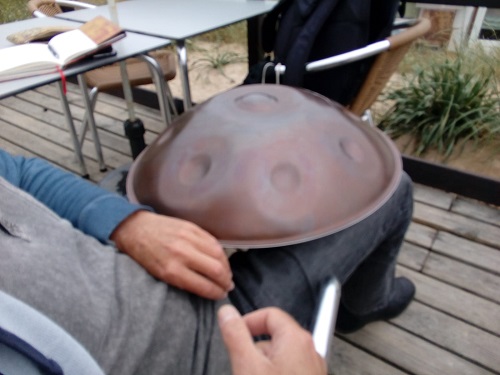 On Sunday we went to our local beach for coffee. As we enjoyed the views across the yet unspoilt beach and rugged coastline of the Parque Natural do Sudoeste Alentejano e Costa Vicentina while chatting to friends, we paused as the sound of haunting music caught our attention. At first, we thought the music was emanating from the cafe but as I turned to locate the source of this mystical sound I noticed a man playing what can only be loosely be described as an instrument shaped like a cataplana.

As the sound continued to float on the breeze, I felt a spiritual connection so I moved closer to inspect the instrument and how the different sounds were produced. Plucking up courage I asked the man what the instrument was called: A Handpan. I was hooked. Love at first sight or should I say, sound. I asked him to play some more so I could record on my mobile phone. He kindly obliged and I made up my mind there and then I must have one.

However, as they are handcrafted they are expensive with potentially a long lead time from placing the order. We continued to talk and on leaving he gave me his card. Detlef Michael Cremer.

The moment I arrived home I spent hours researching how and where I’d buy one and then which tone (Scale) I preferred. It was at this point I began spinning on the spot as there were so many options. But where there is a will there’s a way… and I will find a way!

Thank you, Michael, for such a wonderful smile!

Many years ago, I played the classical guitar but after an injury to my hand, I was unable to play. That was 40 years ago and the passion of creating music has been missing until now. I do hope I can manage to play this wonderful instrument.

If there are any other handpan players in the Algarve? I’d love to connect!

22 thoughts on “Handpans and Happiness”